Stats highlight why Aston Villa should be worried this Christmas 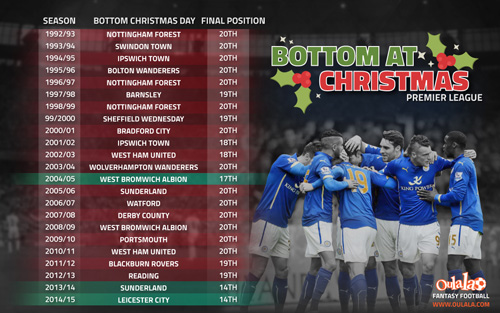 Aston Villa should be worried this Christmas Photo: www.oulala.com

How have the sides that have sat in last spot on 25 December fared in each Premier League season?

Our friends over at fantasy football game www.oulala.com have taken a look back at where each side that was bottom on Christmas Day in each of the 23 Premier League seasons have ended up finishing by the end of the campaign through the years.

Oulala’s research shows that only three sides have escaped relegation after being at the foot of the table on 25 December.

Twelve months ago, Leicester City were languishing in bottom spot with just 10 points from their opening 17 games. The Foxes went on to pull off the greatest escape that the Premier League has ever witnessed, finishing 14th in the league with 41 points on the board.

The previous season saw Sunderland bottom of the Premier League on Christmas Day 2013. Like Leicester, the Black Cats had also accrued 10 points from the opening 17 games. Gus Poyet’s side went on to finish 14th and escape relegation with 38 points.

The only other side to match the survival feats managed by Leicester and Sunderland were West Brom who dodged relegation during the 2004/05 season despite sitting bottom on 25 December.

Of the remaining 20 sides that have been relegated after sitting in last spot on Christmas day, 14 went on to finish bottom.

It doesn’t look good for bottom placed Aston Villa. History shows that the Villans have a 13 per cent chance of survival.