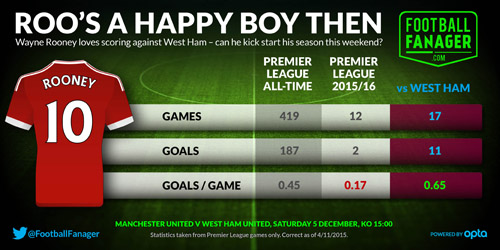 Wayne Rooney has endured indifferent form in the league so far this season.

But, as this infographic from leading fantasy football site Football Fanager shows, West Ham are a team primed to offer him a chance to kick-start his season.

The 30-year-old striker has scored a disappointing two goals in 12 Premier League appearances so far this season.

The England international has failed to score a Premier League goal since a 3-0 win against his former club Everton at Goodison Park on 17 October.

The Manchester United striker’s goal per game rate against the Hammers is almost four times better than he’s managed in 12 Premier League games this term and almost 50% better than his career average.

It makes a convincing argument for the England man to start Saturday’s fixture – can he get on the score sheet?

Louis van Gaal’s side are in third place and a point behind Manchester City and Leicester City.