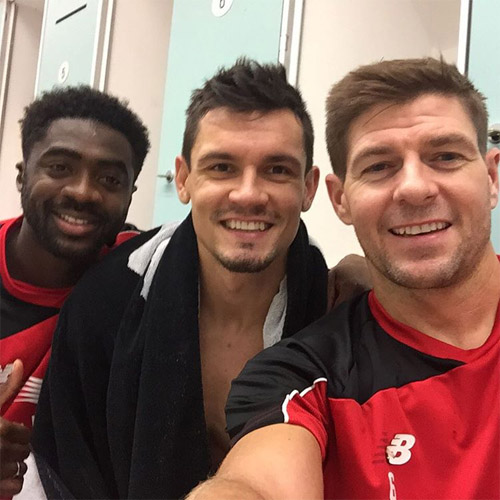 Steven Gerrard was all smiles as he snapped a selfie with Liverpool defenders Dejan Lovren and Kolo Toure on Saturday.

The former Reds captain has been training with Jurgen Klopp’s squad over the past week or so after he finished up with LA Galaxy for the winter following the end of the Major League Soccer season.

Gerrard has already ruled out the possibility of a short-term loan return to the five-time European champions, despite the midfielder working with Klopp and his players over the coming weeks.

And the 35-year-old snapped a selfie with Liverpool duo Lovren and Toure ahead of the Merseyside outfit’s trip to Newcastle United on Sunday afternoon.

Gerrard wrote on his Instagram page: “The boys 👈😁 @dejanlovren06 #kolokolokolo”

Liverpool are in sixth place in the Premier League table.

The Reds have won their last two Premier League games, easing to victories over Manuel Pellegrini’s men and Swansea City.

The Merseyside outfit suffered a 1-0 loss at Newcastle last season.