Steven Gerrard: This Arsenal star is the best in the Premier League 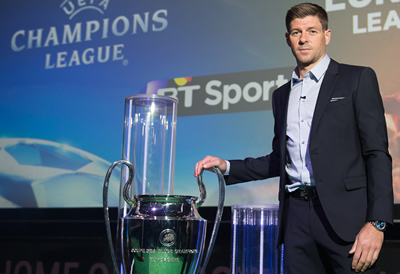 Steven Gerrard has revealed that he is a huge fan of Aaron Ramsey, describing the Arsenal star as the best attacking midfielder in the Premier League.

The Wales international has been a regular fixture in Arsene Wenger’s first team so far this season, scoring two goals and making one assist in 11 Premier League games for the north London side.

Ramsey recently returned from a hamstring injury and scored Arsenal’s third goal in their 3-1 win over Sunderland at Emirates Stadium last weekend.

And former Liverpool captain Gerrard has urged Gunners boss Wenger to continue to deploy the 24-year-old in a central midfield role in the coming weeks and months.

“I don’t think he’ll be happy himself playing out wide because he hasn’t got the legs – his qualities are all [about playing] in the middle,” said Gerrard, speaking on BT Sport ahead of Arsenal’s Champions League clash with Olympiacos on Wednesday night.

“When he’s in that form, he’s the best attacking midfielder in the Premier League. You’ve got to play your best players where they want to be – and he’ll want to be in the middle.

“For me, [when he is] on top form, you build your team around Aaron Ramsey. He has got that ability, especially if he can get to the form where he was a couple of years ago.

“Injuries have obviously set him back but I’m a huge fan.”

Arsenal now turn their attentions back to the Premier League and their trip to Aston Villa on Sunday afternoon.

The Gunners are currently in second place in the Premier League table and will move top with a victory at Villa Park ahead of Leicester’s clash with Manchester United on Monday.

Ashley Young: This is why Man United were knocked out of the Champions League

Steven Gerrard: Why I would’ve loved to play with this Arsenal star