Alexis Sanchez is not letting his latest injury setback get him down...

Alexis Sanchez may currently be sidelined with a hamstring injury – but that does not seem to be getting him down.

The Chile international missed Monday night’s 2-1 win over Manchester City with a hamstring problem and Arsene Wenger revealed after the game that the Chilean is likely to miss the Christmas period after suffering a minor setback in his recovery.

However, the 27-year-old looked to be in good spirits as he joined Nacho Monreal, Petr Cech and ‘Santr’ Clause to rock out to carols last week to create a special Christmas song, to raise awareness of the Arsenal Foundation.

We’re not quite sure about his future as a keyboard player, however.

The song was released ahead of Arsenal’s match against Manchester City, when the Gunners will be celebrating the work of the Foundation. 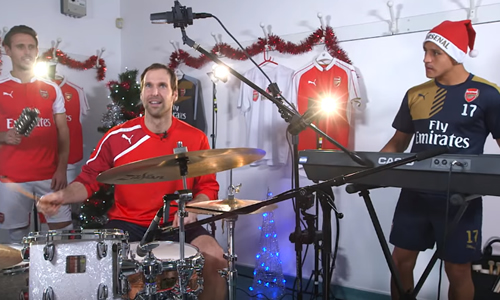 Wenger and the Arsenal first-team squad donated a day’s wages and there were a range of fundraising initiatives for supporters at Emirates Stadium on Monday evening.

Since the Arsenal Foundation was launched in 2012, more than £2m has been committed to fund projects in the United Kingdom and overseas, benefiting over 200,000 individuals along the way.

John Hartson: Why Arsenal have put down marker in title race