It seems that Manchester United’s poor run of form has not caused Louis van Gaal to lose his sense of humour.

The Dutchman’s future has been a relentless source of speculation in recent days after a run of three Premier League defeats followed their Champions League exit earlier this month.

Van Gaal watched his United side produce an improved display as they were held to a goalless draw by Chelsea at Old Trafford on Monday night as their winless run was extended to eight games.

Despite his side’s stuttering form, the United boss remains a favourite with plenty of Red Devils fans, and the Dutchman took the time out to meet some supporters and sign some signatures after Monday’s stalemate. 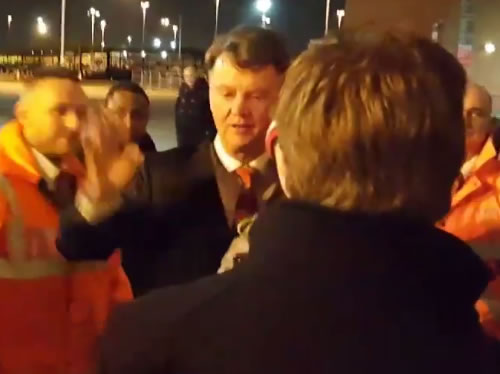 As he posed for selfies and spoke with fans, one supporter can be heard chanting Van Gaal’s name in the video above.

The Dutchman eventually acknowledges the fan by waving and replying: “You are the only one!”

Photos: Liverpool’s forgotten defender all smiles ahead of Sunderland clash