Ander Herrera and Juan Mata are two of the more skilful members of the Manchester United squad.

The former Chelsea midfielder has scored an impressive four goals and has made three assists in nine Premier League games this season.

Herrera, meanwhile, has netted twice in the Premier League as well as making two assists for team-mates.

However, perhaps as a timely reminder to manager Louis van Gaal, Herrera got out some of his flicks and tricks during Mata’s video.

And the Spanish duo showcased their impressive close-control skills during a short clip which the 26-year-old playmaker uploaded the above video clip. 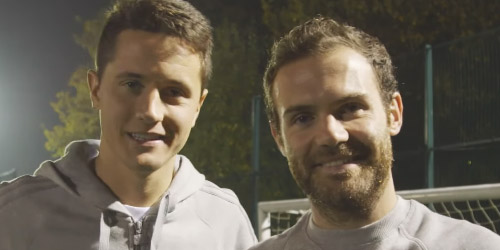 Herrera has been facing questions over his United future in recent weeks after struggling to secure a regular first-team football in Louis van Gaal’s side.

However, the 26-year-old has reiterated his desire to remain at the Red Devils despite reports claiming the midfielder wants showdown talks with Louis van Gaal.

Mata has netted 19 times in 61 Premier League games for the 20-time English champions since his £37.1m move to United from Chelsea in January 2014.