Arsenal stars Olivier Giroud, Laurent Koscielny, Mesut Ozil and Per Mertesacker have had their first experience of Airbump Footpool in a France v Germany doubles match held at the Arsenal Training Ground.

This activity was brought to life by Citroën, who has created the new and unique Footpool table with Airbump technology forming the cushions of the pool-style table.

As well as showcasing the skill set of the players, the France v Germany match – consisting of Koscielny and Giroud against Ozil and Mertesacker – brought out the competitive spirit of the Arsenal first-team players. Like a classic game of pool, the team who potted all of its balls first, won.

It was the German duo of Ozil and Mertesacker that emerged victorious. The action was captured in a fun video, which also shows the players practising their trick shots while trying to out-do each other. 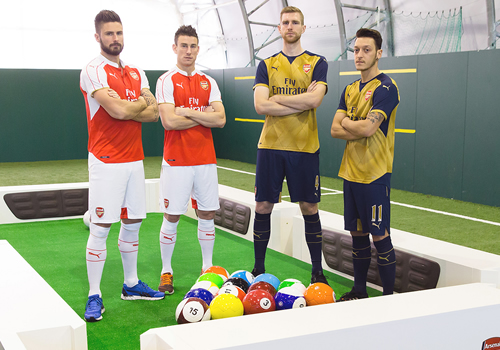 The Footpool phenomenon is becoming hugely popular in the UK as more and more fans take on the challenge of potting balls with their feet, rather than a pool cue.

The Airbump Footpool table will be making an appearance at Emirates Stadium early in 2016, giving fans an opportunity to try it out for themselves.

Airbump technology is a feature of the multi-award winning Citroën C4 Cactus and is designed to protect the bodywork from minor bumps and scrapes. For more information about the Citroën C4 Cactus, visit: www.citroen.co.uk/cactus