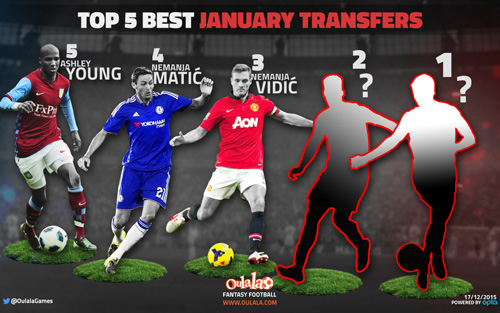 Since its inception in 2003, the January transfer window has produced a whole host of panic buys and disappointment. However, it has also produced some real gems.

Fantasy football game www.oulala.com have made a top-five list of the Premier League’s most iconic and best January transfers.

In this list, Oulala are excluding players from clubs that are no longer in the Premier League. This means that Fulham’s Clint Dempsey and Birmingham’s Christophe Dugarry are out of the list. Sorry guys.

Starting from the back at number five is Ashley Young and his move to Aston Villa back in 2007. The Englishman went on to make 157 appearances for the Villans over the space of five seasons. Under manager Martin O’Neill, he helped his side to three consecutive sixth-place finishes and scored 30 league goals for the Claret and Blues. His performances at Villa earned him his first England senior call up after making numerous appearances at under-21 level.

One of two Serbians to make Oulala’s list is current Chelsea man Nemanja Matic. Chelsea and Matic was a love affair that nearly never happened. Having originally signed for the Blues in 2009, Chelsea failed to realise Matic’s potential and made only two senior appearances for them that term before being loaned out to Vitesse. He was then eventually sold to Benfica in 2011. Jose Mourinho re-signed Matic in January 2014. His sense of authority and calmness in possession quickly established himself as one of Chelsea’s most important players that year.

Prior to his signing, Nemanja Vidic was relatively unheard of outside of Serbia and Russia. However, Vidic went on to become a fan favourite cementing his place with Manchester United for nine seasons before moving onto Italy. Unlike most foreign players moving to the Premier League, Vidic settled in quickly and established himself as one of the league’s most-accomplished defenders. His partnership with Rio Ferdinand in the back four was a force to be reckoned with. The Serbian centre-back won the Premier League with United five times. In the end, he made 211 league appearances for the Red Devils earning himself 15 goals and many more clean sheets.

Brought from: Spartak Moscow
Cost: £7.2m
Status: Sold to Inter Milan for an undisclosed fee in 2014

Despite being heavily injury prone, Daniel Sturridge formed one-half of Liverpool’s vital and ruthless SAS partnership (the other half being Luis Suarez), which saw them demolish teams and nearly win the title back in the 2013/14 season. That season saw Sturridge and Suarez score a combined 52 league goals compared to Liverpool’s 101 league goals overall. Prior to this, during Sturridge’s first half season for the redmen, he scored 10 league goals in 14 matches. His last and current season for Liverpool have been hit with a string of lengthy injuries. However, when he is on the pitch he reminds us of his quality and excellent goal scoring ability.

Was there ever any doubt? Love him or loathe him, the former Liverpool man lit up the Premier League with his fiery temper, countless nutmegs and even more goals. He was the leading role in Liverpool’s SAS partnership. Ironically his transfer was initially overshadowed by Liverpool’s signing of Andy Carroll for a club record fee of £35m (the less said about that the better).The two were brought in to fill in the void left over by former Liverpool striker Fernando Torres. However, it soon became apparent that Suarez was by far the better signing. In his three-and-a-half seasons for the Reds, he netted 69 goals in 110 league appearances. The Uruguayan got progressively better with each season scoring more and more goals. Liverpool’s near title-winning season in 2013/14 was by far his best and saw him score an incredible 31 goals in 33 league appearances. His absence the season after showed just how crucial Suarez was as Liverpool struggled to mount any sign of a title challenge eventually finishing the season in sixth.