Photo: Willian poses with trio in Chelsea team hotel ahead of Bournemouth clash

These Chelsea stars look to be in good spirits... 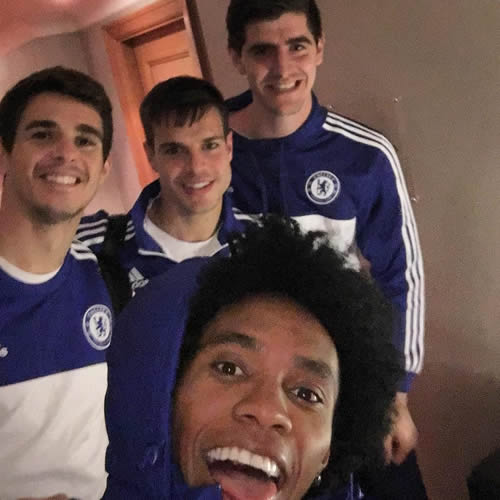 Willian looked in good spirits as he snapped a selfie with Thibaut Courtois ahead of the goalkeeper’s return to the Chelsea squad for Saturday’s clash with Bournemouth at Stamford Bridge.

The Belgian shot-stopper has been out of action since early September after suffering a knee ligament injury and undergoing surgery to correct the problem.

However, Jose Mourinho confirmed on Friday that the goalkeeper is set to return to the Chelsea squad for Saturday’s clash at Stamford Bridge, although he did not confirm if he would start or not.

And Courtois looked thrilled to be back ready for action with his team-mates.

Willian snapped a picture of himself with Courtois, Oscar and Cesar Azpilicueta and shared it on his Instagram account on Friday night.

The Brazilian forward wrote: “With @willianborges88 @oscar_emboaba and the big man @thibautcourtois before dinner! #CFC”

Chelsea head into Saturday’s game in 14th place in the Premier League and looking to return to winning ways after they were held to a goalless draw by Spurs last weekend.