Young Brit Hunt on a Mini adventure in Dakar

Harry Hunt is a winner. The young racer has won every rallying discipline he has entered and he intends to be crowned champion of the famous Dakar Rally, or simply Dakar, within the next five years.

Hunt is ambitious. No one under the age of 30 has won the Dakar in a car before and Hunt, 27, is determined to be the first.

Hunt is a Brit. No British driver has triumphed in the Dakar and becoming the first constitutes another record for Hunt to break.

Hunt is a talented driver. Thanks to his ability Mini UK have entrusted their British representative with their £1million MiniAll4 car.

“I’ve got a five-year plan,” said Hunt. “The first year is all about learning. Coming in the top ten would be an amazing achievement for me.”

“I’m hoping for something similar in my second year. Then I want to be on the podium in year three, and win it in my fourth or fifth, or both!”

The Dakar is renowned for its difficulty. It’s a gruelling two week test of endurance, concentration and navigation over varying types of tough terrain, and only 50% of drivers cross the finish line. The stages are long and some will take place in searing heat, creating plenty of opportunities for mistakes.

“I know the other guys will all be going for the win and will be pushing to the limit and make mistakes,” said Hunt, “so if I focus on me and learn from the mistakes I make in my first Dakar, it’s going to help me for the future.”

The “other guys” Hunt speaks of are a talented bunch that demonstrate the competitiveness of Dakar. Seven former World Rally Championship drivers will line up on the starting line in South America in January 2016. 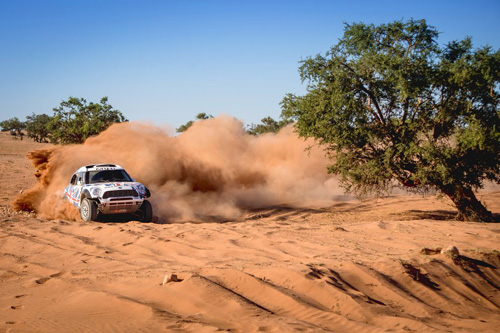 As will this year’s favourite Nasser Al-Attiyah, a two-time Dakar winner and the reigning champion, whom Hunt has seen up close as they’ll both be racing for Mini.

WRC is a different animal compared to rally-raid but it’s telling that there are so many former WRC competitors making the switch, Hunt included.

“WRC seems to get a bit dull,” said Hunt, who has previously won the Junior WRC Rookie Cup. “The schedule tends to stay the same. Loeb has dominated and won it for nine consecutive years, his driving ability is amazing and so is his car. And now we’ve seen Sebastien Ogier dominating having won it for the last three years.”

One of the features of the Dakar is the scenic nature of the race. Arguably the most iconic stage runs in Uyuni, Bolivia, home to the famous Salt Flats, and Hunt says he can’t wait to be there again having visited it with friends in 2008, not least as it will offer some respite from his exertions.

“You can hit top speed on the Salt Flats because there are no cautions. That is a help to us because it means you can rest, drink and eat a little as you’re just going in a straight line.”

Physical preparation is, of course, critical to performance in sport and Dakar is no exception. Not least because of the heat and altitude – the Salt Flats are 3,656 metres above sea level – the drivers will face over the two week period.

The race is about endurance so Hunt has been focussing on cardio work rather than building up his strength. Running, rowing and football are all part of his programme, as is altitude training at St Mary’s University in Twickenham.

Cycling, however, is the staple of his training diet. Long sessions on a bike increase Hunt’s heart rate to between 140 and 150 beats-per-minute, the same level it will reach in the car during the race.

Andy Schulz, Hunt’s navigator, as well as being responsible for getting the car through the waypoints, must also make sure Hunt eats at the right time.

“Andy’s notes tell him when I need to eat,” said Hunt. “Nutrition is important for mental concentration because as soon as you start to feel hungry or thirsty, it’s too late. Your mind becomes pre-occupied with it and you can make mistakes.”

“I can concentrate in a car for long periods easily, it comes naturally to me, so I’ve been focussing on the physical side more than the mental. Nothing concentrates the mind like going fast. Morocco helped me in that respect.”

Hunt took part in an essential Dakar warm-up rally in Morocco where he finished seventh overall. The event has many parallels to the Dakar race in terms of terrain and stage length, and Hunt was optimistic off the back of his result and is on a high.

If Hunt can achieve seventh, seventeenth or simply cross the finish line of the 2016 edition of Dakar in Rosario on the 16th January that would be a big step in the right direction for the young driver. Come the new year, Britain may have yet another record-breaker.