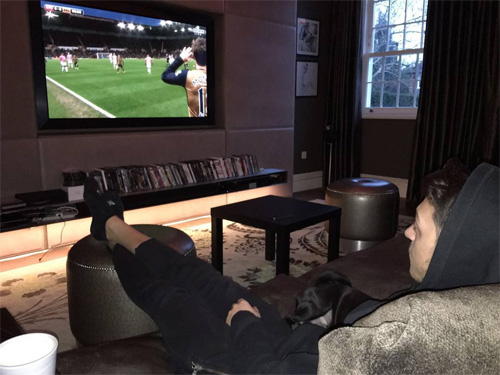 Mesut Ozil reassured Arsenal supporters that he hopes to be fit for their game against Chelsea next week after missing their trip to Stoke City on Sunday.

The Germany international was forced to sit out Sunday’s late kick-off at the Britannia Stadium due to a minor foot injury following Arsenal’s 3-3 draw at Liverpool mid-week.

Ozil has been in scintillating form for the north London side so far this season after scoring three goals and making 16 assists in 20 Premier League games.

The World Cup winner took to Instagram to give Arsenal supporters an update on his injury status as he watched Arsene Wenger’s side face Stoke alongside his pet pug, Balboa.

Ozil posted the above photo and wrote: “Balboa and me watching today’s match against Stoke! Hopefully I’ll be back well for the next match. But for now: COME ON YOU GUNNERS 👏🏽👏🏽 #coyg #bpl #Arsenal #afc”

Ozil moved to Arsenal from Real Madrid in a club-record £42.5m deal in 2013 but has only won back-to-back FA Cup crowns.

The Gunners are looking to win their first Premier League title since their famous unbeaten triumph in the 2003-04 campaign.