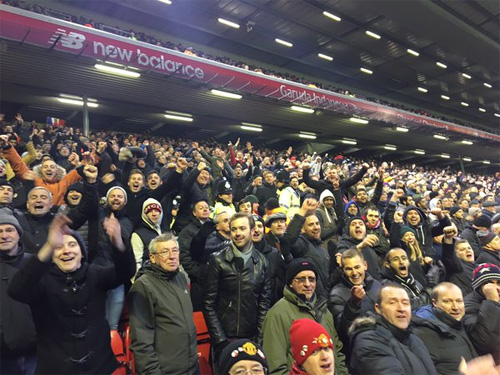 Wayne Rooney continued his goal-scoring form with the winner at Anfield as Manchester United beat Liverpool 1-0 in Sunday’s early kick-off.

The United skipper scored the decisive goal with 11 minutes remaining after the England international reacted quickest when Marouane Fellaini’s header rebounded off the woodwork.

Here is a selection of the best Twitter reaction from the professionals, past and present, in chronological order to United’s late win at Anfield.

Marcos Rojo has a pre-match message for his team-mates as the Argentina international joined Michael Carrick and Phil Jones in the stands at Anfield:

How i would like to help the team in this thrilling match! Unfortunately i can't, but we are always #united @ManUtd pic.twitter.com/HDt9q3WYPe

Unsurprisingly, there is plenty of praise for 30-year-old Rooney after his third Premier League goal of the week and his first at Anfield since 2005:

It had to be @WayneRooney didn't it..

While many United supporters aren’t happy with the performance from the away side, ex-Red Devil Rio Ferdinand is full of appreciation for a scrappy 1-0 win away from home at a rival:

Roooooooooooney!! Smash & grab….better ways to win a game…but its a lovely feeling this way….if they hold on to the win!

Phil Jones jumping about celebrating in with the manc fans made me sick. Worse Man U team I've ever seen 😡😡😡😡😡

Gary Lineker has his say on the 1-0 win:

Get in boys! Waited a long time to do an away game properly. Nearly thrown down 3 rows when we scored 😳👏🏼💪🏼👌🏼 pic.twitter.com/mwvObcU3Um