Cesc Fabregas had the last laugh on Sunday...

Fabregas responding to the booing Arsenal fans after the game https://t.co/M3OmTfCJGw

Cesc Fabregas had the last laugh on Sunday as he helped Chelsea secure a 1-0 victory over Arsenal at Emirates Stadium.

The former Arsenal captain produced a man of the match display as he masterminded the Blues’ narrow win over their local rivals in north London.

Fabregas, who played for Arsenal for eight years before joining their rivals Chelsea in the summer of 2014, was booed and jeered by the home fans throughout the game.

And this video above shows Fabregas having the final say as he left the pitch after helping Chelsea secure all three points. 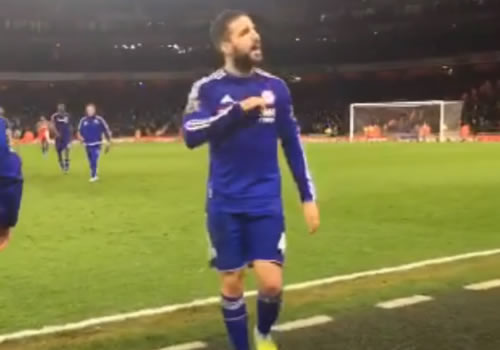 Cesc Fabregas was the man of the match on Sunday Photo: Twitter

The 28-year-old is seen patting the Chelsea badge and nodding his head as he headed towards the tunnel at Emirates Stadium.

Arsenal were reduced to 10 men when Per Mertesacker was sent off for bringing down Diego Costa, who was through on goal.

Costa then scored the only goal of the game five minutes later when he fired home from close range.