Photo: Tired Cesc Fabregas puts his feet up after Chelsea’s draw with Everton 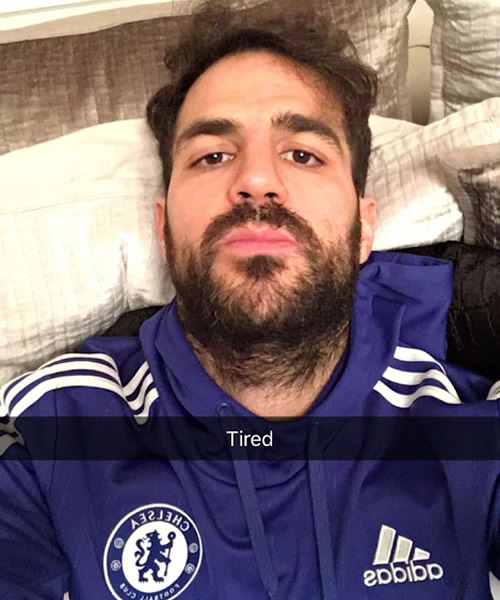 Chelsea were made to work hard for a point during their clash with Everton at Stamford Bridge on Saturday afternoon.

The Blues twice had to come from behind to earn a draw after a 3-3 thriller in west London.

And Chelsea playmaker Fabregas, who played the full 90 minutes and was in impressive form for the home side, put his feet up on Saturday evening after the gruelling Premier League encounter.

Fabregas shared the picture above on his personal Snapchat account and wrote: “Tired.”

The visitors took the lead when John Terry scored an own-goal before Kevin Mirallas put the visitors 2-0 up.

Diego Costa’s goal made it 2-1 and Fabregas’s deflected shot brought the Blues level.

However, Ramiro Funes Mori restored Everton’s lead in the 90th minute only for Terry to back-heel in from close range, despite being offside.

The result left Chelsea in 14th place in the Premier League and six points above the relegation zone.

Arsenal man admits he plans to leave The Emirates this month

Jamie Carragher predicts where Man United will finish this season