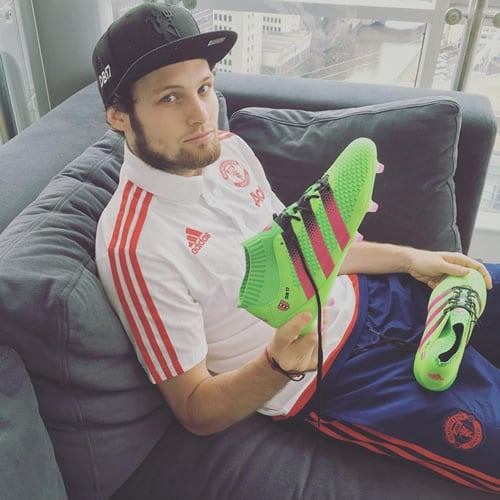 Daley Blind looked to be in good spirits as he showed off his latest pair of Adidas football boots ahead of Manchester United’s FA Cup trip to Derby County on Friday night.

The Netherlands international will be expecting to feature as the Red Devils look to bounce back to winning ways following the disappointment of their 1-0 loss to Southampton in the Premier League last weekend.

Blind played the full 90 minutes as Louis van Gaal’s men slumped to their sixth Premier League defeat of the season at the hands of the Saints as Charlie Austin scored a late winner.

However, the 25-year-old looked focused on Thursday as he posed for a picture with his new boots at home in his training gear.

Blind has been a regular fixture in the United first-team this season, scoring one goal and making one assist in 21 Premier League games.