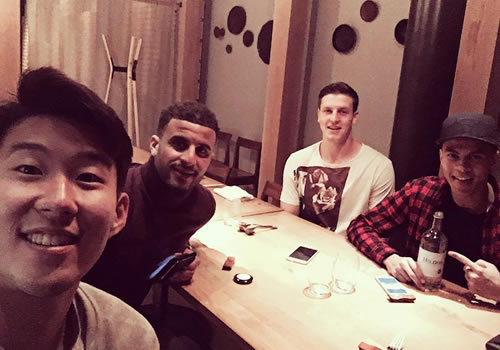 Son Heung-min and Kevin Wimmer look to be settling well into life at Tottenham Hotspur following their transfers to the north London club in the summer.

Son, 23, has been a regular fixture in the Lilywhites’ first team so far this term and has scored two goals and made one assist in 12 Premier League games for Mauricio Pochettino’s men.

Wimmer, who joined the Lilywhites from German side FC Cologne in the summer has found his first-team opportunities somewhat more restricted, having only featured twice in the Europa League and once in the League Cup.

However, both summer signings look to be getting on well with their new team-mates, if Dele Alli’s post on social media is anything to go by.

Alli was joined by Kyle Walker and the two summer recruits as the Spurs stars enjoyed a meal out on Thursday night.

Tottenham are preparing for their FA Cup third round clash with Leicester City at White Hart Lane on Sunday.