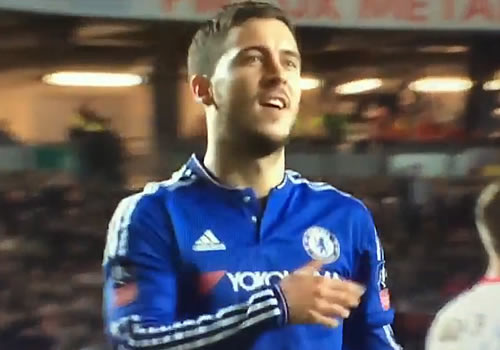 Eden Hazard has moved to play down the speculation surrounding his future by kissing the Chelsea badge after scoring his first goal of the season in Chelsea’s thumping 5-1 FA Cup win over MK Dons.

The Belgium international’s future has been a relentless source of speculation in recent months following his poor form for the west London side.

Hazard, 25, has been touted as a potential transfer target for Real Madrid and Paris Saint-Germain this summer. 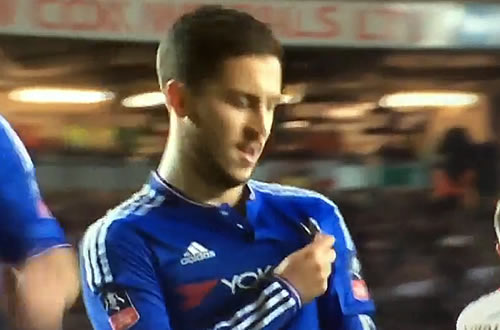 However, the playmaker appeared to demonstrate his loyalty to the west London side by kissing the Chelsea crest after dispatching his penalty during the FA Cup fourth-round win on Sunday.

Hazard, like many of his Chelsea colleagues, has struggled to replicate the form which earned him the PFA player of the year award last season.

However, the midfielder seems to be happy at Chelsea, if his latest goal celebration is anything to go by. 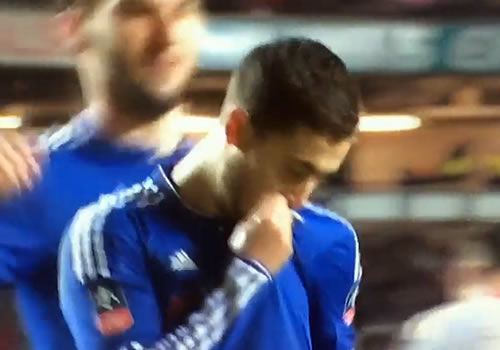 An Oscar hat-trick, plus goals from Hazard and Bertrand Traore wrapped up a comfortable win for the Premier League side.

Former Lille man Hazard will be expecting to feature when Chelsea travel to Watford in the Premier League on Wednesday night.