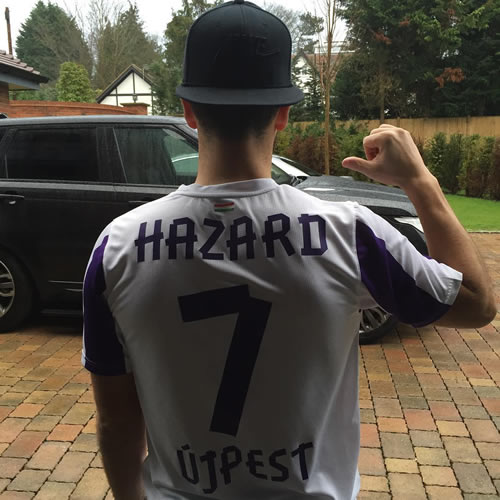 Eden Hazard looks ready to kick off 2016 in a positive manner as he prepared to head to Chelsea’s final training session on Saturday morning ahead of their clash with Crystal Palace.

Guus Hiddink’s side travel to Selhurst Park aiming to make a winning start to the new year after a miserable end to 2015 for the west London side left them languishing in 14th place in the Premier League table.

Hazard has come in for plenty of criticism in recent weeks for his failure to produce consistent performances for Chelsea along with many of his team-mates as they made a disastrous start to their title defence.

However, the Belgian playmaker looked ready for a fresh start on Saturday morning, as he prepared to get into his Land Rover and drive to his club’s Cobham training ground.

Hazard shared the picture above on his personal Instagram account and wrote: “Let s go to the training #ujpest #hazardo #family”

Hazard, 24, is yet to score for Chelsea in the Premier League this season, and has notched up two assists for his team-mates.