Tottenham's players have been enjoying their trip to Barcelona this week... 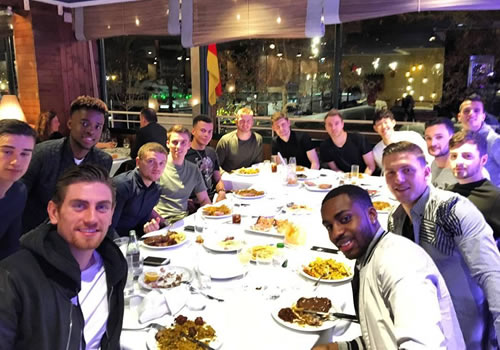 Erik Lamela shared this picture of himself and his team-mates on Monday Photo: Erik Lamela / Instagram

Tottenham Hotspur’s players have been enjoying some warmer climes in recent days following their Premier League win at Crystal Palace at the weekend.

Spurs kept their bid for a top-four finish on track as they beat Palace 3-1 at Selhurst Park to keep themselves within five points of Premier League leaders Leicester City.

Mauricio Pochettino’s squad have jetted off to Barcelona and have been training at the Estadi Olimpic Lluis Companys as they gear up for their FA Cup fourth-round clash at Colcester on Saturday lunchtime.

And the north London side’s players seem to be getting on off the pitch just as well as they do on it, as the enjoyed dinner together on Monday evening.

Erik Lamela shared the picture above on his personal Instagram account and wrote: “Nice dinner with the guys in Barcelona! #barceloneta #COYS #spain”

Tottenham are currently fourth in the Premier League table and two points behind local rivals Arsenal in third as the title race hots up.