Photo: Harry Kane chills with his NFL boys ahead of Tottenham v Leicester 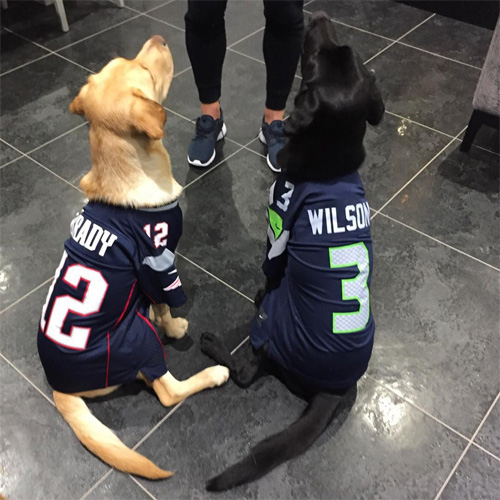 Harry Kane may be one of the Premier League’s most-famous players, but it’s safe to say the Tottenham Hotspur striker is something of a NFL fan.

The England striker is enjoying a few days rest after having helped the north London side secure a battling 1-1 draw with Roberto Martinez’s Everton side at Goodison Park in the Premier League on Sunday afternoon.

Kane is expected to be in action against high-flying Leicester City in the third round of the FA Cup at White Hart Lane on Saturday.

However, the Tottenham talisman is focusing on all things NFL for now, dressing his dogs in New England Patriots and Seattle Seahawks shirts ahead of this season’s playoffs.

Tottenham’s next Premier League game is a home clash against Leicester City on Wednesday 13 January.

However, Mauricio Pochettino’s side face the Foxes in the FA Cup third round at White Hart Lane ahead of the Premier League game.

Photo: Cheslea’s Cesc Fabregas jets to Barcelona with his girlfriend and daughters