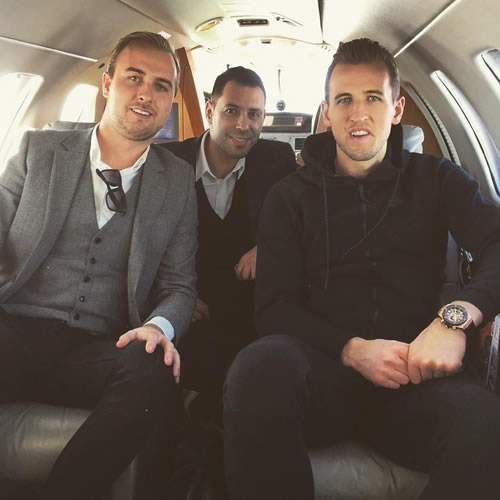 Harry Kane was all smiles as he jetted off to Madrid from Tottenham’s training camp in Barcelona to film for Nike Football.

The Spurs striker was in Spain with his team-mates as Mauricio Pochettino’s men trained ahead of their FA Cup fourth-round clash with Colchester this weekend.

Kane looked to be in good spirits as he was joined by his older brother Charlie on a private jet as they headed to the Spanish capital.

It is understood that Kane was being filmed for an advertising campaign for Nike ahead of Euro 2016.

Kane posted the picture above on his personal Instagram account and wrote: “Great day filming for @nike today in Madrid ! #nike @charlie_kane123”

Earlier in the day, Kane trained with his Tottenham team-mates in Barcelona ahead of their clash with the League One outfit on Saturday lunchtime.

The Spurs squad headed to Barcelona in the wake of their 3-1 win over Crystal Palace, which left them fourth in the table and five points off top spot.