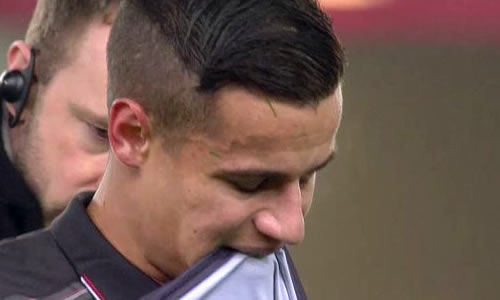 Philippe Coutinho was substituted in the first half due to a hamstring injury Photo: Sky Sports

Jurgen Klopp admits that he has been left “very frustrated” after watching two of Liverpool’s first-team regulars pick up injuries during Tuesday night’s 1-0 League Cup win over Stoke City.

Philippe Coutinho had to be substituted after he pulled up early on during the first leg of the semi-final clash at the Britannia Stadium with a hamstring strain, before Dejan Lovren also suffered the same injury after half-time.

Kolo Toure also caused some concern late on when he was pictured clutching his hamstring, but Klopp revealed after the game that the Ivorian was suffering from “cramp”.

Coutinho and Lovren are now expected to be out of action for a number of weeks, and Klopp could not hide his frustration as he addressed the media after the final whistle.

Speaking on Sky Sports, Klopp said: “It’s a strange feeling. I’m proud as it was a perfect reaction from the last game.

“You saw it was a special game. A good game, lively, aggressive. Only 1-0 but of course we have two bad injuries and that’s why I’m not only lucky tonight.

“We now have three injured centre-halves and the only fit one [Toure] got a cramp in the last minute.”

He continued: “The biggest problem for us is we have two and maybe three injured players again.

“[It is] very frustrating. The problem is we had too much injury, when the players come back others are injured. It is a cycle that needs to come out.

“We have no break, no recovery. Players who never had a problem had no problems in pre-season are fine, for all other players it is up and down.”

Jordon Ibe scored the only goal of the game in the 37th minute ahead of the return leg at Anfield in three weeks’ time.

Halep, Sharapova, Williams and Ferrer out, but Britons Bedene and Broady win