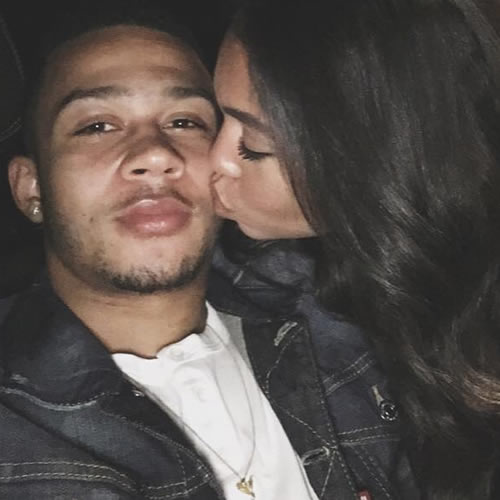 Memphis Depay enjoyed a trip to Paris with his new girlfriend Lori Harvey last week before watching Manchester United book their place in the fifth round of the FA Cup.

The Netherlands international was once again an unused substitute as the Red Devils were 3-1 winners over Derby County on Friday night as they became the first team to secure their place in the fifth round.

Depay has struggled to produce consistent performances for United since his big-money transfer to Old Trafford from PSV Eindhoven in the summer.

However, the Dutchman looked to be keeping himself in good spirits away from the pitch as he enjoyed a midweek trip to Paris with his new partner, who he posed for a selfie with on Saturday night.

Depay then posted the picture below of the couple holding hands on their trip to Paris last week and wrote: “In the City of Love.”

The winger will be hoping to feature when Manchester United host Stoke City at Old Trafford on Tuesday night in the Premier League.

Depay has only managed to score two goals in 17 Premier League games for United so far this season.