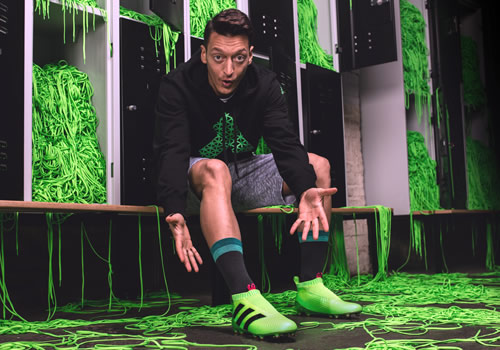 Mesut Ozil has been in fine form for Arsenal this season Photo: Adidas

Mesut Ozil has revealed that he is determined to break Thierry Henry’s record of 20 assists in the Premier League this season.

The Arsenal legend notched up 20 assists for his team-mates during the 2002-03 campaign, a feat that no player has been able to match since.

However, Ozil is well on his way to surpassing the impressive tally, having already made 16 assists for his team-mates in the top flight this season to help the north London club top the Premier League table.

And in an exclusive Q&A with Adidas, Ozil admits that he is targeting Henry’s record this season.

“It’s easy to boss the game when you’re playing with so many great players and my aim now is to break the record for the most assists in a Premier League season.”

Ozil sat out Arsenal’s goalless draw with Stoke City at the weekend due to a minor foot injury but is expected to make his return to action when the north London side host champions Chelsea at Emirates Stadium on Sunday afternoon.