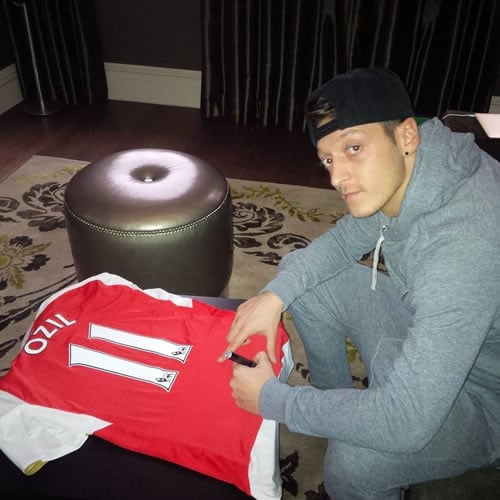 Mesut Ozil has taken to social media to thank his fans for their support as he and his Arsenal team-mates prepare for their FA Cup clash with Sunderland this weekend.

The Germany playmaker has been in inspired form for the Gunners this season and has earned plenty of new admirers for his sparkling displays for Arsene Wenger’s men.

Ozil has scored three goals and made 16 assists in the top flight to help the north London side move two points clear at the top of the Premier League table.

And the former Real Madrid star has opted to thank his followers for their support by giving away a signed shirt on Instagram.

Ozil posted the picture above on his personal Instagram account and wrote: “Hello fans, your crazy artworks, mockups and drawings of me assisting somebody made me laugh tears. 😉 As a small thank you I’m giving away a signed shirt for the coolest of your ideas! Post it on Instagram, Facebook or Twitter with the hashtag #AssistMesut and you are part of the game. I will be the jury and pick the winner…. 😊”

Arsenal, who finished third last season, are aiming to win their first Premier League title since 2004 this season.

The Gunners have won the FA Cup for the last two seasons.