Mesut Ozil is known for having one of the best touches in the Premier League.

And it is not hard to see why, if the video above is anything to go by.

In a promotional shoot for sponsor Adidas, Ozil is filmed performing a number of keep-ups with a piece of chewing gum before accurately firing it onto the lens of the camera.

Ozil has been one of the Premier League’s standout performers this season and has notched up 16 assists for his team-mates to help Arsenal lead the way at the top of the table. 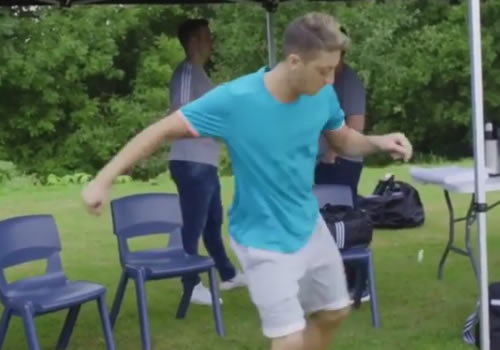 The Germany playmaker missed last week’s goalless draw at Stoke City due to a minor foot injury but is expected to make his return to action when Arsenal host Chelsea on Sunday afternoon.

Alexis Sanchez is also thought to be in contention to start Sunday’s clash against the champions after recovering from the hamstring injury which has kept him out of action since November.