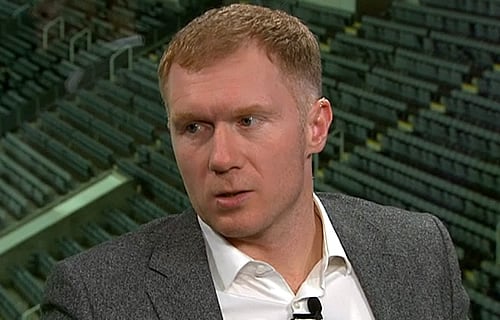 Paul Scholes believes that Manchester United are fully capable of finishing in the top four this season but has all but ruled out a title challenge from the Red Devils.

Scholes watched Louis van Gaal’s men twice squander the lead as they were held to a 3-3 draw in a thrilling clash at Newcastle United on Tuesday night.

Is it a team that can go on to win the league? I don’t think so

United have come in for plenty of criticism for their inconsistent form in recent weeks, and although Scholes feels the Red Devils were much improved against the Magpies, he feels that they are already out of the title race.

Speaking on BT Sport after the game, Scholes said: “They were a lot better tonight. They looked a real threat, there was an intent to score goals. But every fixture feels like a tricky game and you’re not sure what United you’re going to get.

“At home they’ve struggled really. The last eight results have not been good enough.

“Obviously, the win against Swansea was good and a draw against Chelsea you probably accept, but you have to remember that they were playing against a team who are second from bottom here [Newcastle] and they’ve not won that game as well.

“Is it a team that can go on to win the league? I don’t think so at the minute. Top four is a definite possibility, they should be good enough.”

United took the lead in the ninth minute when Wayne Rooney converted his penalty – and the England captain then turned provider for Jesse Lingard as the Red Devils went 2-0 up seven minutes before half-time.

However, the hosts pulled one back through Georginio Wijnaldum shortly before the break to give Steve McLaren’s men hope.

Aleksandar Mitrovic then scored his penalty after Chris Smalling bundled the Serb down in the box in the 67th minute.

Rooney looked to have secured all three points when he fired into the top corner in the 79th minute.

But the Magpies earned a point thanks to Paul Dummett’s late strike, which deflected in off Smalling.