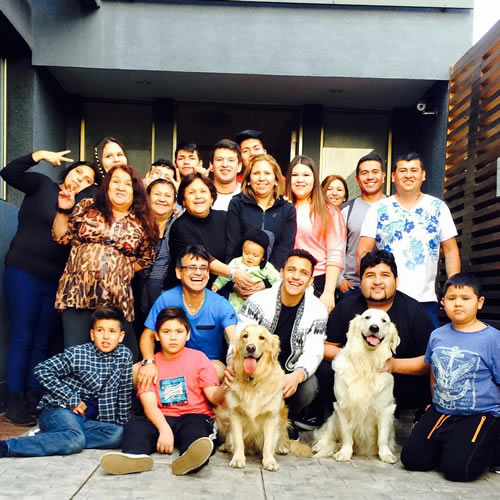 Alexis Sanchez looked to be in good spirits as he rung in the new year with his family.

The Chile international has been out of action since late November after suffering a hamstring injury in the 1-1 draw at Norwich.

Sanchez is closing in on a return to action but is not expected to be available for Arsenal’s Premier League clash with Newcastle United at Emirates Stadium on Saturday.

However, the former Barcelona star looked to be enjoying himself as he celebrated the start of 2016 with his family and two dogs, Atom and Humber.

Arsenal head into Saturday’s clash with Newcastle top of the Premier League table and above second-placed Leicester City on goal difference.

Sanchez has been a regular fixture in the Arsenal team so far this season and has scored six goals and made one assist in 14 Premier League games for the Gunners.

Martin Keown predicts where Arsenal and Tottenham will finish this season