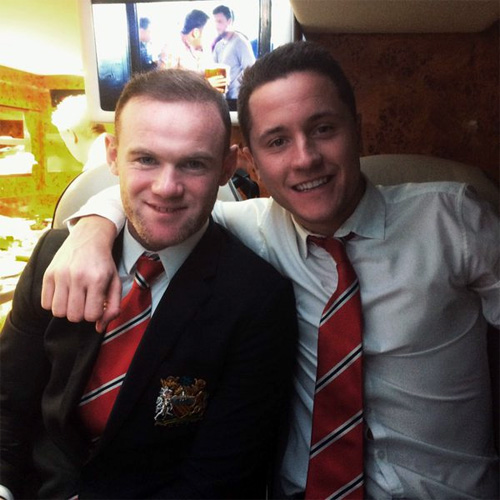 Ander Herrera joined Manchester United’s match-winner Wayne Rooney for a photo on the bus back to Manchester after Sunday’s 1-0 win at Liverpool.

The United skipper scored the decisive goal with 11 minutes remaining after the England international reacted quickest when Marouane Fellaini’s header rebounded off the woodwork.

Herrera was unable to have a telling impact on the match and the uncapped Spanish midfielder was replaced by Memphis Depay before Rooney’s late winner on Merseyside.

However, the 25-year-old was still all smiles with Rooney on the team coach after a thrilling 1-0 victory over bitter rivals Liverpool at Anfield.

With the happiest guy ! What a victory ! 🔴 pic.twitter.com/jFu4tarcJL

The 30-year-old striker has scored four goals in his last three games in all competitions for the Red Devils.

Louis van Gaal’s side moved up to fifth place in the Premier League table and are two points behind fourth-placed Tottenham Hotspur.