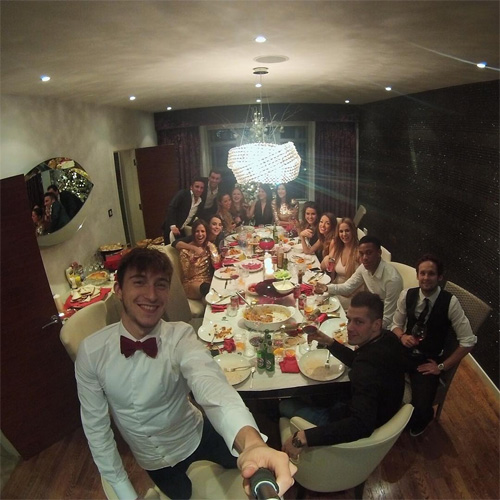 Matteo Darmian snapped a sheepish selfie with some of his Manchester United team-mates around the dinner table as the Red Devils stars relaxed ahead of Saturday’s must-win game.

Louis van Gaal’s squad haven’t had much to cheer about in recent weeks after extending their winless run to eight games in all competitions following Monday night’s goalless draw with Chelsea.

However, the Red Devils showed signs of a potential revival against the defending Premier League champions amid growing pressure on manager Van Gaal following Jose Mourinho’s sacking at Stamford Bridge.

Darmian was one of the big plus points for the 20-time English champions against the Blues, and the defender joined Blind, Martial and Morgan Schneiderlin, plus their wives, for some New Year’s Eve grub – and a selfie.

Darmian wrote on his Instagram page: “Happy New Year to everyone🎉”

The Red Devils are in sixth place and nine points behind Premier League leaders Arsenal.