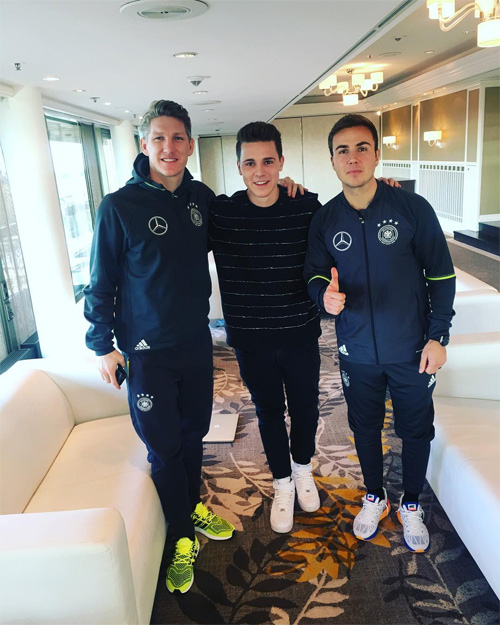 Bastian Schweinsteiger caught up with some famous German friends on Monday.

The Manchester United midfielder may be 31, but the Germany international appears to have his finger on music’s pulse.

The World Cup winner joined his German team-mate Mario Gotze, 23, for a photo with their compatriot and musician Felix Jaehn.

The Liverpool target, who played under Jurgen Klopp at Borussia Dortmund until he joined Bayern Munich in 2013, posted on his Instagram page on Monday night.

Schweinsteiger has endured a tough start to his Premier League career as Louis van Gaal’s side continue to struggle for form.

The Germany midfielder missed Saturday’s surprise 1-0 defeat by Southampton at Old Trafford due to injury.

Gotze, meanwhile, has been regularly linked with a potential move to Liverpool since Klopp took over the reins from Brendan Rodgers at Anfield in October.

The former Dortmund forward has scored one goal in seven Bundesliga appearances so far this season, whilst the No19 has netted twice in two Champions League outings.

Ian Wright: Why Tottenham have as good a title chance as Arsenal