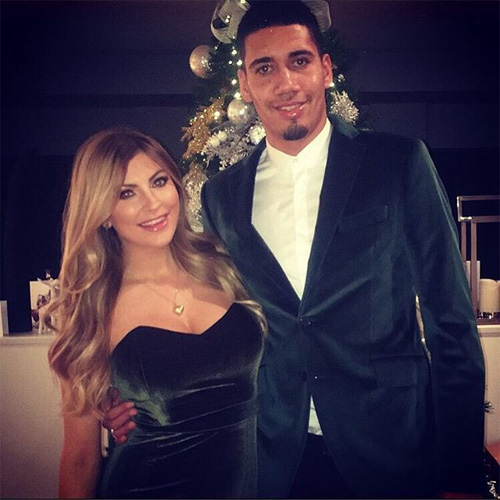 Chris Smalling had every reason to smile as the Manchester United defender celebrated New Year’s Eve with his stunning girlfriend.

The England international has been one of the only positives for Louis van Gaal in an otherwise disappointing season for the Red Devils so far.

However, even Smalling’s form has been unable to prevent United’s dramatic slump in recent weeks and the Red Devils have failed to win any of their last eight games in all competitions.

But the 25-year-old centre-half was still in good spirits with his glamour model girlfriend Samantha on New Year’s Eve as the pair were suited and booted for some festive celebrations.

Smalling wrote on his Instagram page: “I would like to wish everybody a heathy and happy #2016 Thanks for all your support now enjoy your evening in style 🎉 #happynewyear”

Smalling has made one assist in 18 Premier League appearances for the Red Devils so far this season.

United are in sixth place in the Premier League table and nine points adrift of current leaders Arsenal ahead of their clash against Swansea City at Old Trafford on Saturday afternoon.