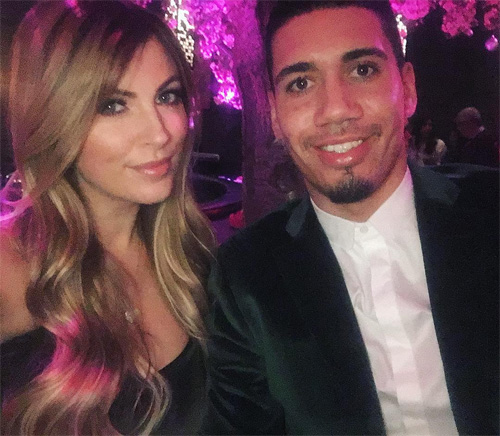 The England international has regularly posted snaps with his glamour model girlfriend over the past 12 months or so as their relationship has flourished, like Smalling’s Red Devils career.

The 25-year-old United defender has become an increasingly important member of Louis van Gaal’s side, proving ever-present at centre-half for the 20-time English champions so far this season.

And tformer page three model Samantha Cooke posted a snap with her famous footballers boyfriend and wrote the following message on the photo-sharing app: “❤️ @smalling the love of my life ❤️ couldn’t wish for a more perfect partner to share my life and all its adventures with! Here’s to 2016”

The former Fulham centre-half has made one assist in 18 Premier League appearances for the Red Devils so far this season.

United are in sixth place in the Premier League table and nine points adrift of current leaders Arsenal ahead of their clash against Swansea City at Old Trafford on Saturday afternoon.

Photos: Firmino, Coutinho all smiles as Liverpool train ahead of West Ham trip