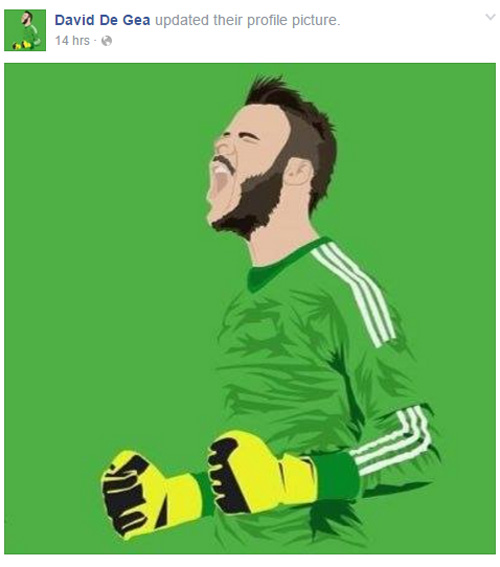 David De Gea prompted panic amongst some Manchester United supporters on Facebook after the goalkeeper changed his profile picture on Sunday night.

The Spain international posted an artistic, cartoon sketch of the 24-year-old as his new profiler, but suspiciously, United’s badge was missing from the goalkeeper’s shirt.

Naturally, given the paranoid nature of social media, some Red Devils fans interpreted the change as an indication that De Gea could be on the move, even though the Adidas logo was also absent.

The club’s reigning player of the year came close to joining Real Madrid in the summer transfer window before an issue with documentation prompted the proposed deal to fall through on La Liga’s deadline day.

Some United supporters pointed out that one of Madrid’s goalkeeper shirts is green, to pile further misery on concerned Red Devils fans quoted below.

Lance Mmoja posted: “His top is logo-less in this profile picture. Well, it speaks volumes if you are pessimistic. It speaks nothing if you are optimistic. I just can’t decide where I stand..”

Abdi Mohammed wrote: “where is man united logo? David madrid fans are not like united fans,look how are treating our hero cr7 dont rash stay calm and be united”

However, one Facebook user pointed out that United also have a green goalkeeper shirt in an attempt to calm down panicked fans.

James Sowter wrote: “I noticed earlier someone posted madrids keeper kit because it was green and in his profile picture he is wearing a green kit and people are saying where’s the badge! Calm down the kit is also green I’m this photo”

Of course, the profile photo change probably means nothing, given De Gea’s impressive performance again this season for United.

Graeme Souness: What Tottenham must do to challenge for the title