Dejan Lovren, Daniel Sturridge and Mamadou Sakho are all looking to return to action for Liverpool as soon as possible 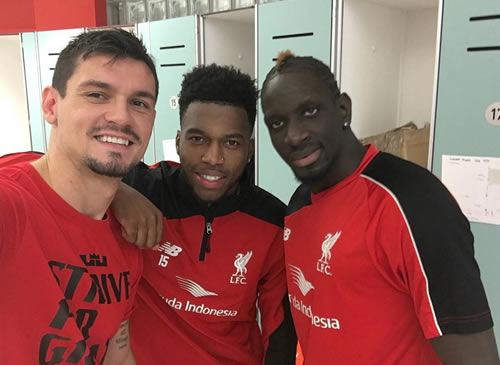 Dejan Lovren, Daniel Sturridge and Mamadou Sakho posed for selfie at Liverpool’s Melwood training ground on Wednesday afternoon as the trio vowed to return stronger than ever from injury.

Lovren became the latest Liverpool player to suffer a hamstring injury after he was forced off during the second half of the Reds’ 1-0 win over Stoke City in the League Cup semi-final on Tuesday night.

Earlier in the game, Philippe Coutinho was also hauled off after suffering the same injury to add to the number of Reds on the sidelines.

The pair join the likes of Martin Skrtel and Joe Gomez on the sidelines, while Sakho also missed Tuesday’s game to leave the Reds severely short of options at the back heading into Friday night’s FA Cup clash with Exeter.

However, despite their latest setbacks, the trio looked to be in good spirits as they posed for a snap on Wednesday.