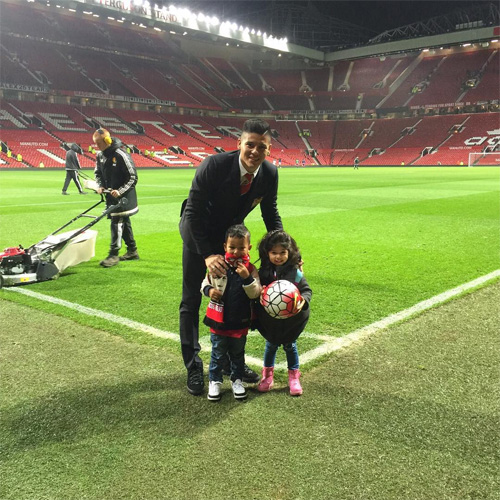 Marcos Rojo didn’t feature in Manchester United’s 2-1 victory over Swansea City, but the injured defender still managed to get on the Old Trafford pitch on Saturday.

The Argentina international is currently sidelined as the 25-year-old defender continues to recover from a shoulder operation.

Rojo hasn’t featured for United since a goalless draw with PSV Eindhoven in the Champions League group stage on 25 November.

The former Sporting Lisbon defender watched Louis van Gaal’s side ease to a slender victory over the Swans thanks to goals from Anthony Martial and Wayne Rooney to end United’s four-game winless run in the Premier League.

Rojo invited his children onto the Old Trafford pitch following the win to pose for a photo as the South American eyes a swift return to first-team action following an injury-hit 2015/16 season so far.

Rojo wrote on his Instagram page: “after a great victory today, on the pitch with my loves!”

The United defender moved to Old Trafford in a £16m deal from Portuguese side Sporting Lisbon following the World Cup in the summer of 2014.