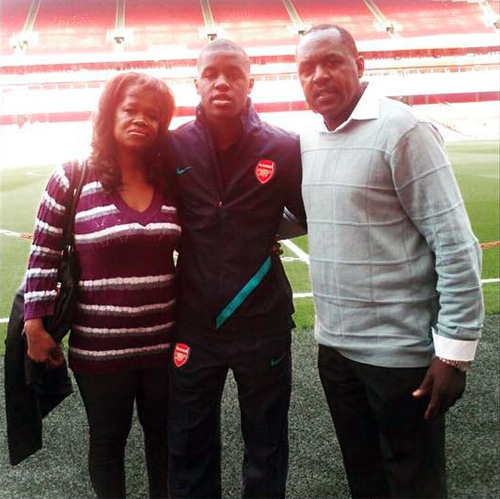 Joel Campbell has revealed he has fulfilled a promise that he made to his parents after playing for Arsenal at The Emirates.

The Costa Rica international has enjoyed a breakthrough season in north London after capitalising on injuries to Alex Oxlade-Chamberlain and Theo Walcott in October.

The 23-year-old moved to the Gunners from Saprissa in 2011 but the striker had to wait five years before becoming a first-team regular at the FA Cup holders.

Campbell has established himself as a key part of Arsene Wenger’s side since his scored his first top-flight goal on his full Premier League debut in a 3-0 victory at Swansea City.

And the Arsenal striker posted a heartfelt message for his parents on his Instagram page on Monday night after the Gunners hoisted themselves back to the top of the Premier League table.

Campbell wrote: “It’s been almost 5 years since this photo was taken. That day I made a promise that they would see me play there and thank god that came true. I’ll be paying for their sacrifices till my last days.. Thank you God for all of these blessings”

The Costa Rican forward has scored four goals and has made three assists in 17 appearances in all competitions for the north London side so far this season.

Peter Schmeichel predicts where Man United will finish this season