Photo: Liverpool signing all smiles with Mignolet and Sakho after 5-4 win 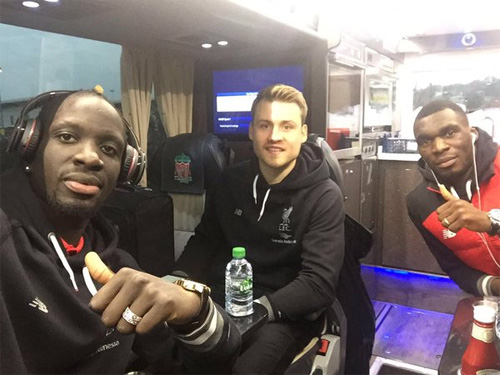 Mamadou Sakho could afford a smile with Simon Mignolet and Christian Benteke after Liverpool were thrilling 5-4 winners at Norwich City.

Adam Lallana netted his first Premier League goal of the season in the 95th minute after Sebastien Bassong appeared to have salvaged a 4-4 draw for the home side in Saturday’s early kick-off.

Liverpool had broked the deadlock thanks to Roberto Firmino’s 18th-minute goal before Dieumerci Mbokani and Steven Naismith put the Canaries ahead before half-time.

Wes Hoolahan extended Norwich’s advantage from the penalty spot after Alberto Moreno brought down Naismith but Firmino and James Milner put the Reds 4-3 up with 15 minutes to go.

Back to #Liverpool with my teammates after the win

Liverpool’s 5-4 victory over the Canaries was their first Premier League win of 2016.

The Reds make the trip to Leicester City in their next Premier League game.