Photo: Mamadou Sakho all smiles with Alberto Moreno ahead of Liverpool v Arsenal 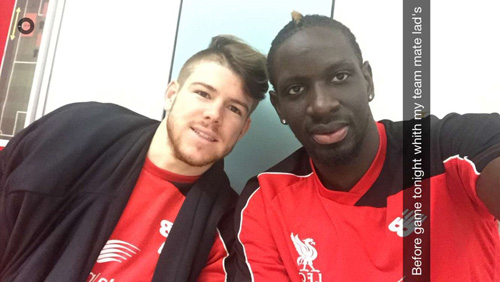 Mamadou Sakho and Alberto Moreno looked relaxed despite the imminent arrival of Premier League leaders Arsenal ahead of Wednesday night’s clash at Anfield.

Jurgen Klopp’s injury-ravaged Liverpool side host the Gunners as the Reds look to make a return to winning ways in the Premier League after a 2-0 loss to West Ham United last time out.

However, Sakho, who missed Liverpool’s last two games due to a knee injury, appears to be in contention to face the Reds if his latest Snapchat post is a clue to his improving fitness.

Sakho’s caption read: “Before the game tonight with my team-mate’s lads”

Sakho has already missed a large chunk of the season through injury after the former Paris Saint-Germain defender sustained a nasty knee problem during a 2-1 defeat by Crystal Palace in November.

Stats highlight how Liverpool can beat Arsenal at Anfield