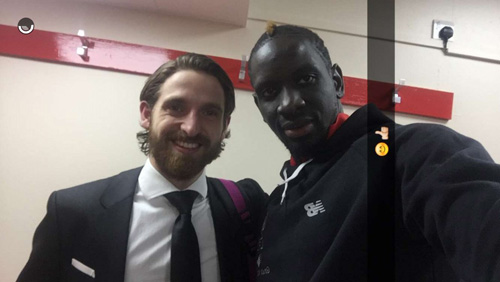 Mamadou Sakho managed to get a selfie with man of the moment Joe Allen after the Welshman scored a dramatic 90th-minute equaliser to salvage a 3-3 draw with Arsenal on Wednesday night.

The 25-year-old came off the bench to replace Emre Can in the 82nd minute before the midfielder managed to guide a low shot past Petr Cech following Christian Benteke’s header.

Allen has been out-of-favour for much season under Jurgen Klopp and his predecessor Brendan Rodgers, which has prompted talk of a move away from Anfield in the January transfer window.

However, Allen was Mr Popular following his late heroics as Sakho snapped a selfie with the Wales international in the Liverpool dressing room.

The midfielder’s 89th-minute equaliser was only his third Premier League goal in four seasons at the Merseyside club.

Allen moved to Liverpool in a £15m deal from Swansea City in 2012 as one of Rodgers’s first signings.