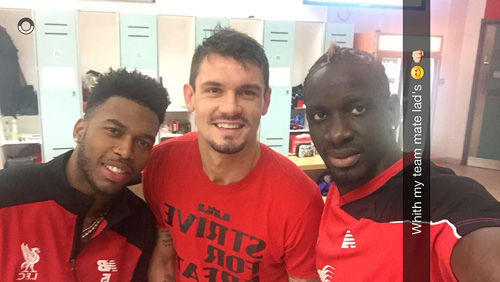 Mamadou Sakho looked to be in high spirits despite his injury setback after Liverpool’s 1-0 victory over Stoke City in the League Cup on Tuesday night.

The France international didn’t feature against the Potters at the Britannia Stadium in the first leg of their Capital One Cup semi-final clash.

Sakho is currently nursing an injury which the former Paris Saint-Germain defender picked up following a 2-0 loss to West Ham United at Upton Park on Saturday evening.

The Frenchman’s centre-half partner Dejan Lovren picked up a hamstring problem during the League Cup tie, whilst Daniel Sturridge is also nursing a similar problem.

And Sakho posted a selfie with his Liverpool team-mates after he joined Snapchat on Wednesday afternoon to keep himself entertained during his injury lay-off.

The Reds are in eighth place in the Premier League table after their Hammers setback.

Photo: Cheslea’s Cesc Fabregas jets to Barcelona with his girlfriend and daughters