Piers Morgan and Ian Wright post a tweet at Tottenham's expense, but Spurs get their own back with late equaliser 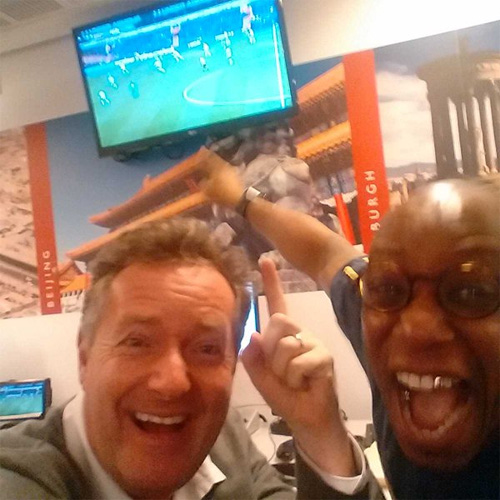 Mauricio Pochettino’s side have been in impressive form in the Premier League over the past few weeks, but Spurs struggled against in-form Leicester ahead of their top-flight meeting at White Hart Lane on Wednesday.

Christian Eriksen had put the hosts into a first-half lead before goals from Marcin Wasilewski and Shinji Okazaki turned the cup tie on its head and edged the Foxes closer to the fourth round.

Morgan and Wright kicked off their new slot on BBC Five Live slot on Sunday evening, and the Arsenal supporter posed with the Gunners legend for a cheeky selfie to prematurely celebrate Tottenham’s defeat.

Spurs losing.. what a great time for Morgan & Wright to make our @bbc606 strike partnership debut. Tune in at 6pm. pic.twitter.com/IYuep5yj5l

However, Spurs had the last laugh after Harry Kane scored an 89th-minute equaliser from the penalty spot to force a third-round replay.

Alan Shearer: Why Tottenham are no longer ‘soft touch’