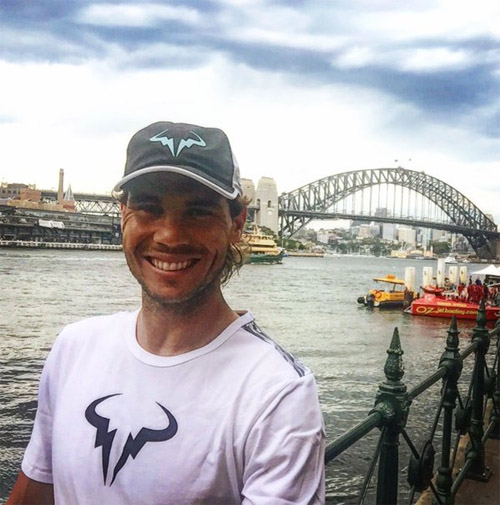 Rafael Nadal cracked a broad grin as the world number five snapped an impressive selfie in front of Sydney Harbour ahead of the Australian Open.

The 29-year-old Spanish ace is bidding to win his 15th Grand Slam and first Major since beating Novak Djokovic in four sets at the French Open in 2014.

The world number one is the clear favourite to win 2016’s first Grand Slam, especially after a 6-1, 6-2 victory over Nadal to win the Qatar Open title on Saturday.

However, Nadal doesn’t appear too fazed by the daunting challenging of beating the Serbian juggernaut at the Australian Open as he soaked up Sydney’s impressive sights on Monday morning.

Nadal has only won the Australian Open on one occasion in 2008 after a five-sets victory over his long-term rival Roger Federer.

The Spaniard lost to Novak Djokovic in five sets in the 2012 final Down Under, before a four-set defeat by Stanislas Wawrinka in 2014.