Photo: Roberto Firmino and Emre Can all smiles in Liverpool dressing room snap 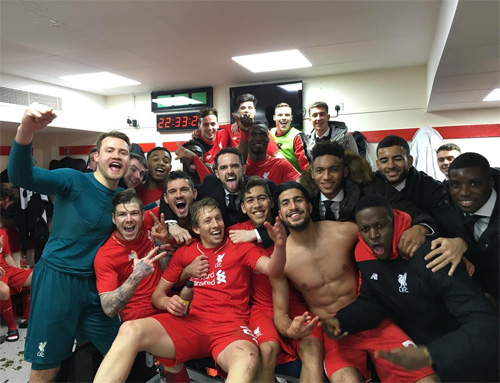 Dejan Lovren posted a selfie of Jurgen Klopp’s triumphant Liverpool side in the Anfield dressing room after the Reds booked their place in the League Cup final.

The Reds eased to a 6-5 penalty shootout victory over Stoke City after Joe Allen dispatched the winning spot-kick after Peter Crouch, Emre Can and Marc Muniesa missed their attempts.

Marko Arnautovic levelled the tie on aggregate in the first half after he placed a finish past Simon Mignolet despite being marginally offside.

Liverpool were unable to respond but Stoke couldn’t find a winner in normal time and extra-time before Allen sealed a 6-5 penalty shootout win.

Lovren, who didn’t feature in the second leg against Stoke, posted the above photo and wrote on his Instagram page: “Wembley we cominggggg…what a fantastic game!! Well done everyone 👏🏻👏🏻 💪🏻💪🏻 #YNWA comeeee onnnnn”

The Reds are bidding to win the competition for the ninth time after reaching their 12th League Cup final on Tuesday night.

The Merseyside outfit are in seventh place in the Premier League table.

Photo: Liverpool signing all smiles with Sakho and Ibe after win