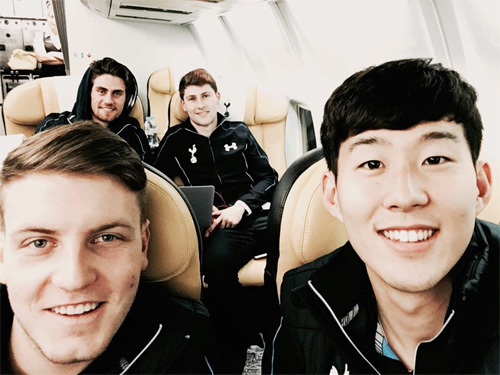 Son Heung-min was all smiles with Tottenham team-mates as the quartet snapped a victorious selfie after Saturday’s 3-1 win at Crystal Palace.

England striker Harry Kane equalised for the north London side in the second half after Spurs defender Jan Vertonghen scored a 30th-minute own goal at Selhurst Park.

Son started the Premier League fixture, whilst Chadli was a second-half substitute for Eric Dier in the thrilling game in the English capital.

The South Korea international orchestrated an Instagram selfie with his team-mates on the trip back to north London.

Tottenham are in fourth place in the Premier League table and five points behind leaders Leicester City.

Spurs make the trip to Norwich City in their next Premier League after the Canaries lost 5-4 to Liverpool in Saturday’s early kick-off.

Photo: Roberto Firmino all smiles with his wife after Liverpool’s 5-4 thriller