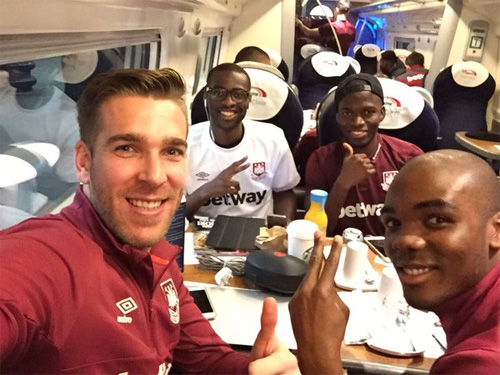 Adrian and his West Ham team-mates looked in confident mood as Slaven Bilic’s squad travelled to Merseyside on Friday night.

West Ham United will face Liverpool at Anfield in the FA Cup on Saturday afternoon for a place in the fifth round.

The Hammers have an excellent record against the 18-time English champions in the Premier League this season.

The east London side were 2-0 winners Brendan Rodgers’s side at Anfield in August before Jurgen Klopp’s men were soundly beaten 3-0 at Upton Park in December.

Adrian snapped a selfie with his West Ham colleagues Enner Valencia, Pedro Mba Obiang and Angelo Ogbonna on their train from the English capital to Merseysidde.

Liverpool booked their place in the League Cup final on Tuesday night thanks to a penalty shootout victory over Stoke City.

The Reds were 5-4 winners at Norwich City in their last Premier League outing last Saturday.

Rio Ferdinand: This Man United legend was out of his depth

Ray Wilkins: Arsenal will win the Premier League if they make this signing