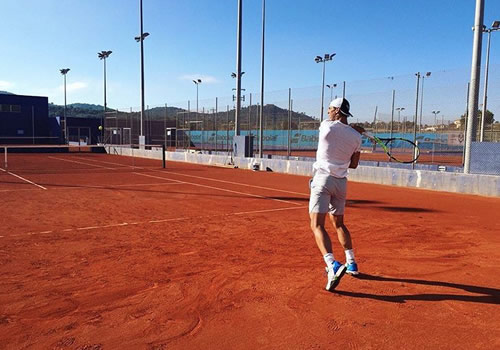 Rafael Nadal looks to have already put the disappointment of his Australian Open exit behind him as he prepares for the clay-court season.

The Spaniard suffered a shock first-round exit in Melbourne last week at the hands of fellow Spaniard Fernando Verdasco as he endured a disappointing start to the 2016 season.

However, Nadal appears to have brushed himself down quickly and is already practising on his favourite surface as he bids to regain his top form this year.

The 29-year-old posted the picture above of himself practicing on the red dirt without a caption on his personal Instagram account on Wednesday morning.

Nadal was already in a mood to bounce back from the loss when speaking to the media after his defeat by Verdasco Down Under. “It was not my day. Let’s keep going. That’s the only thing,” said Nadal.

Nadal also used his personal Twitter account to send a message to his fans thanking them for their support as he works on his game following his disappointment in Melbourne.

THANKS to each and every one of you who follow me on #Twitter! Your support and kind messages make me very happy. #ThankYou

Nadal is set to play at the Rio Open in Brazil next month. The clay-court tournament takes place between 15-21 February 2016 and Nadal won the inaugural event in 2014.