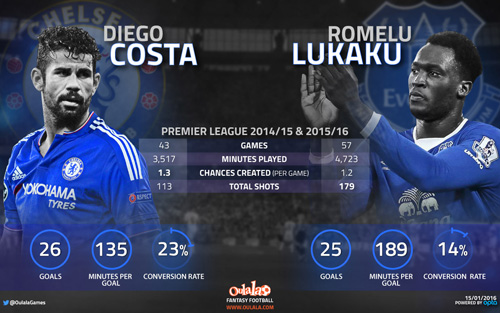 How do Diego Costa and Romelu Lukaku measure up? Photo: www.oulala.com

As Chelsea prepare to host Everton this weekend, Romelu Lukaku returns to the home of his former side.

With Diego Costa just starting to find his form from last season, were Chelsea right to let Lukaku go?

Fantasy football game www.oulala.com’s have taken a look at both players’s stats since Costa joined Chelsea in 2014 to see how the pair compare and whether allowing the Belgian to leave Stamford Bridge was a good decision.

No one can doubt that Lukaku is having an exceptional season at Everton. The Belgium international already has five more goals (15) than last season’s tally of 10 in 36 matches. This makes for a combined total of 25 goals in 57 games.

On the other hand, it is fair to say that Costa’s performances have dropped this season. At this stage last year, Costa had already scored 16 goals in 19 appearances, whereas this term, he has just six in 17 appearances.

However, his exceptional goal-scoring form from last season has Costa well ahead of Lukaku in minutes per goal (135 to 189).

As well as having a better minutes per goal average, Costa has also been far more efficient with his strikes.

The Brazilian-born Spain international has a 23 per cent conversion rate, nine per cent higher than Lukaku.

The Everton striker has scored 25 goals from 179 shots meaning his strike rate lies at just 14 per cent, proving that Lukaku is at times wayward with his efforts and as of yet lacks consistency.

Having scored three goals in three matches, it looks as though Costa is beginning to find his goal-scoring form again. Lukaku has not scored in his last two Premier League matches, with his last goals coming in a 4-3 defeat by Stoke.

The 22-year-old Belgium international has never scored against his former side. A goal against the Blues this weekend would go a long way in proving that Chelsea were wrong to let him go.