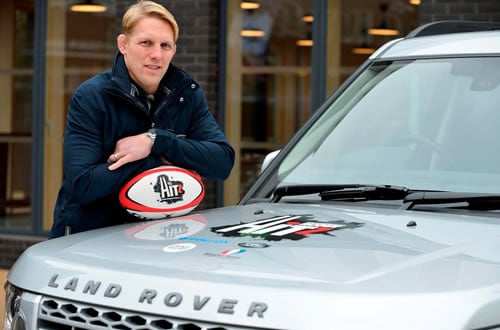 Despite Kvesic being included in Jones’ extended squad last week – albeit as injury cover – the flanker is set to miss out on the clash with the Auld Enemy on February 6 after being one of ten players released back to their clubs this weekend.

For many that has come as a surprise with Gloucester’s Kvesic the in-form No.7 so far this season, having made the most turnovers this Premiership campaign as well as sitting fourth in the tackle count.

In the past Jones has been known to favour traditional opensides and was openly critical of Chris Robshaw during England’s disastrous Rugby World Cup 2015 campaign.

And former flanker Moody, who won a Rugby World Cup with England in 2003, can’t believe that Kvesic hasn’t been given the chance to add to the two international caps he collected three years ago.

“I am absolutely gutted about Matt missing out because he has been playing so well for Gloucester,” said Land Rover ambassador Moody, who was speaking ahead of the annual HITZ awards which take place on February 4th. Land Rover is a partner of HITZ, a programme that uses sport for change, helping youngsters overcome some of lives biggest employment, education and social challenges.

“With the change in regime you would have thought he would be given a shout because the frustrating thing about his involvement with England in the previous regime was that he was never given a chance to play – he was in the squad and never used.

“I think it’s incredibly harsh on him but hopefully he will keep his head up and his time will come again.

“Eddie Jones is maybe falling into that bracket now like all coaches are doing where finding an out-and-out seven is very difficult, you end up with a seven and a half which is what Robshaw was.

“England, historically over the years, have never had an out-and-out seven barring Neil Back, really he was the only one.

“If England really have a desire to field an out-and-out seven there has to be much more time and emphasis spent in creating them, and that’s from a young level from when they are in the academy to the very top level.”

Jones is clearly keen to stamp his own mark on England after taking over from Stuart Lancaster, opting to take the role of captain away from Robshaw and hand it to hooker Dylan Hartley.

During his career Hartley has often made headlines for all the wrong reasons and has missed over a year of rugby through suspension, and Moody is hopeful the Northampton Saint can start grabbing column inches for all the right reasons.

“It has been a long time since I played with or trained with Dylan and individuals change over the years as they grow in their own confidence and leadership style,” he added, “Certainly Dylan would have done that, he has been captain of Northampton for a number of years now.

“I would have always liked to have seen a younger man given the job so that he can grow into the role, like Martin Johnson, like Richie McCaw, like Brian O’Driscoll, who developed into great leaders over time but were also the out-and-out first choice in their position.

“The difficulty with Dylan at the minute is that for me he is not out-and-out first choice for his position, but obviously in Eddie’s mind he is.

“The other statement he wanted to make is that he wanted an abrasive, aggressive, confrontational England side.

“For all Dylan’s misdemeanours on and off the field, he is an abrasive and aggressive rugby player and you know you will get that every time with him.

“If he can get the other area of his game under control then he could be a very good captain – I certainly hope he can master his emotion and grow into that role and lead from example on that pitch rather than grabbing other headlines.”

But regardless of what decisions could have been made differently, Moody insists England should be full of confidence as they go in search of a first Six Nations title since 2011.

“I certainly think England and the new regime have the opportunity to win the Six Nations,” he added.

“I think if you can get past this first game in Scotland, which is no easy cake walk as Scotland is a very hard place to go and win, then that will set them up nicely going forward.

“I think they should be confident because the talent in the squad is definitely there but the only question is does Eddie Jones and his coaching staff have enough time?

“They only have two weeks essentially and the training regime has been spoken about and the boys will only get one day off before that match and they will be made to work very hard, but hopefully it will be all worth it.”

Lewis Moody is a Land Rover ambassador. Land Rover is a partner of HITZ, the sport for change programme, and will be supporting the annual HITZ Awards on February 4th. @LandRover_UK #WeDealInReal